Innovate where it matters – Teleports versus better ox carts

Rather than providing better tools for the same job, organizations need to use the latest technology to redefine what the job is. Martin Srubar September 14, 2022 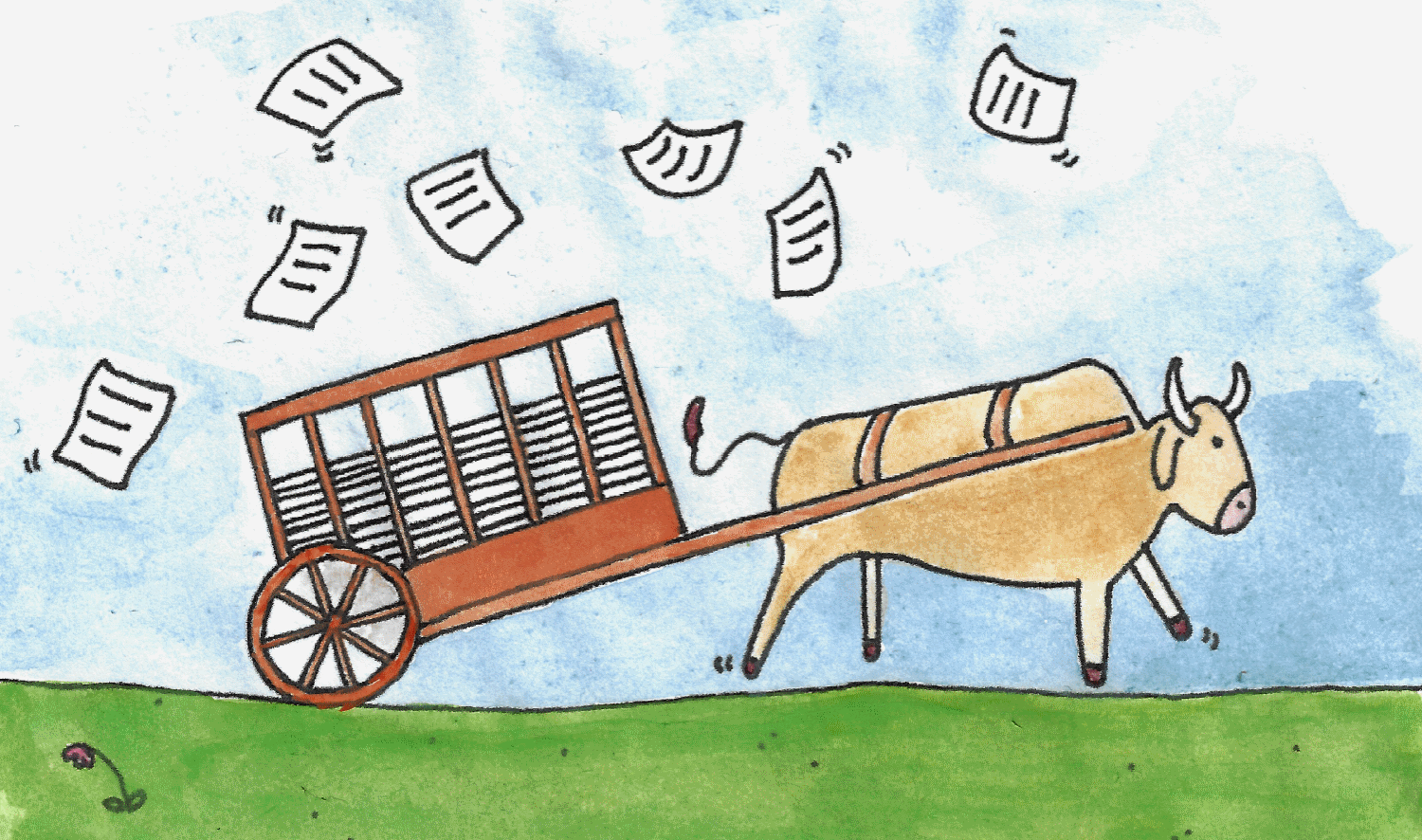 In today’s turbulent world innovation and efficiency improvements are critically important to the organization’s ability to survive and thrive. Many look at their current tools and try to make them better.

For example, how could we improve a business that relies on ox carts to transport goods and people? Our oxen are slow but reliable, and they can feed on grass that grows along the dirt roads that go everywhere. However, we want to be able to transport more goods and people faster. What should we do?

Should we build a railway network and steam trains to deliver goods? And perhaps keep using oxen for the last mile?

Should we build trucks, a network of fuel stations, and tar-seal all the roads where we might want to go? Or perhaps we should build trucks that can still go on dirt roads? 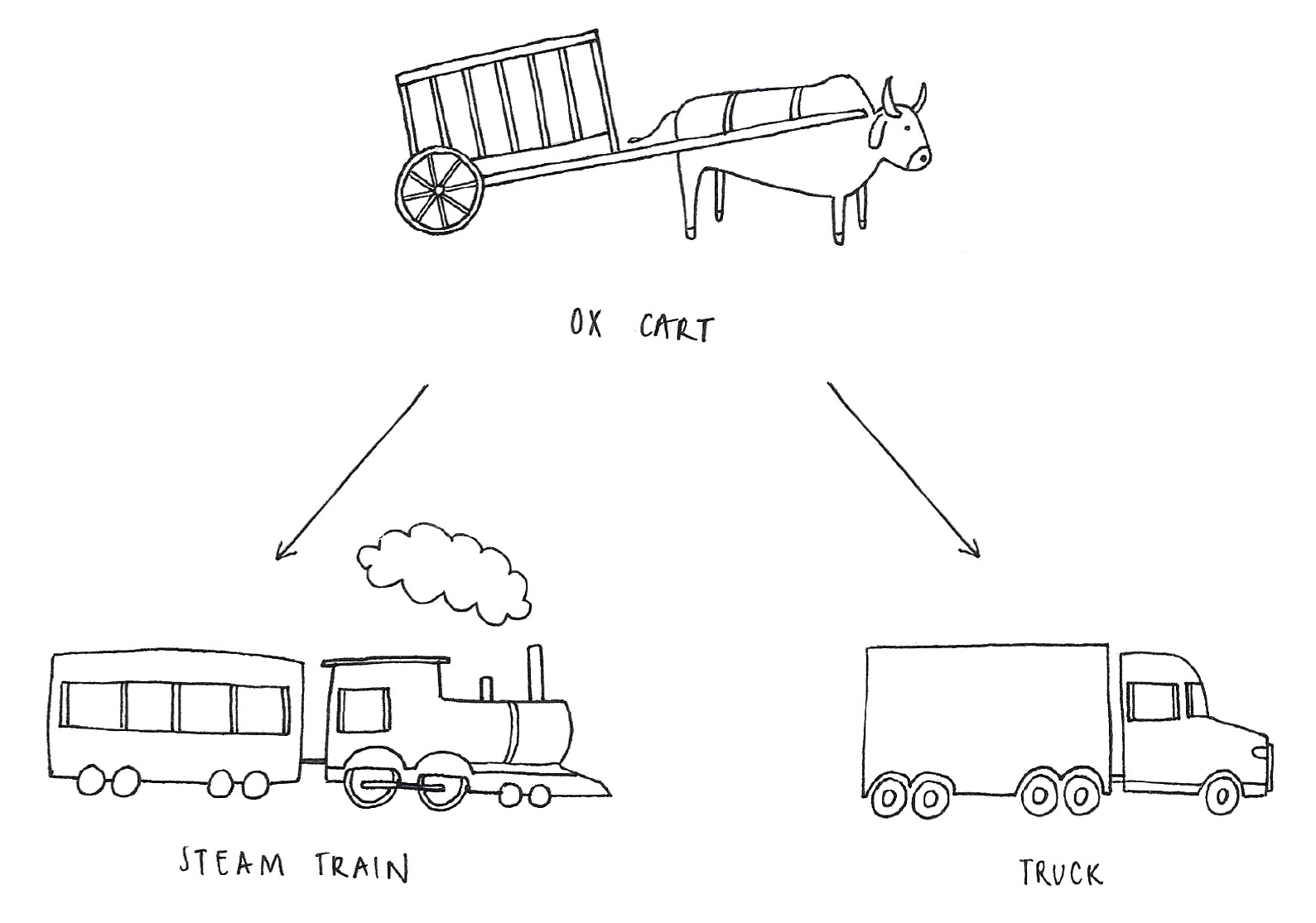 How do you improve the ox cart? Build a train or a truck?

In the example above, building a train and building a truck are really the same – they are both ways of doing the same thing, using different tools. The driver will very likely be happier and much more productive when driving trains or trucks instead of ox carts (especially on rainy days).

In the realm of document creation, such efficiency improvements could include replacing a pen and handwriting with a mechanical typewriter. You could replace an electric typewriter with a computer-based text editor, or perhaps replace the ubiquitous desktop version of Microsoft Word with Google Docs or another content collaboration platform. 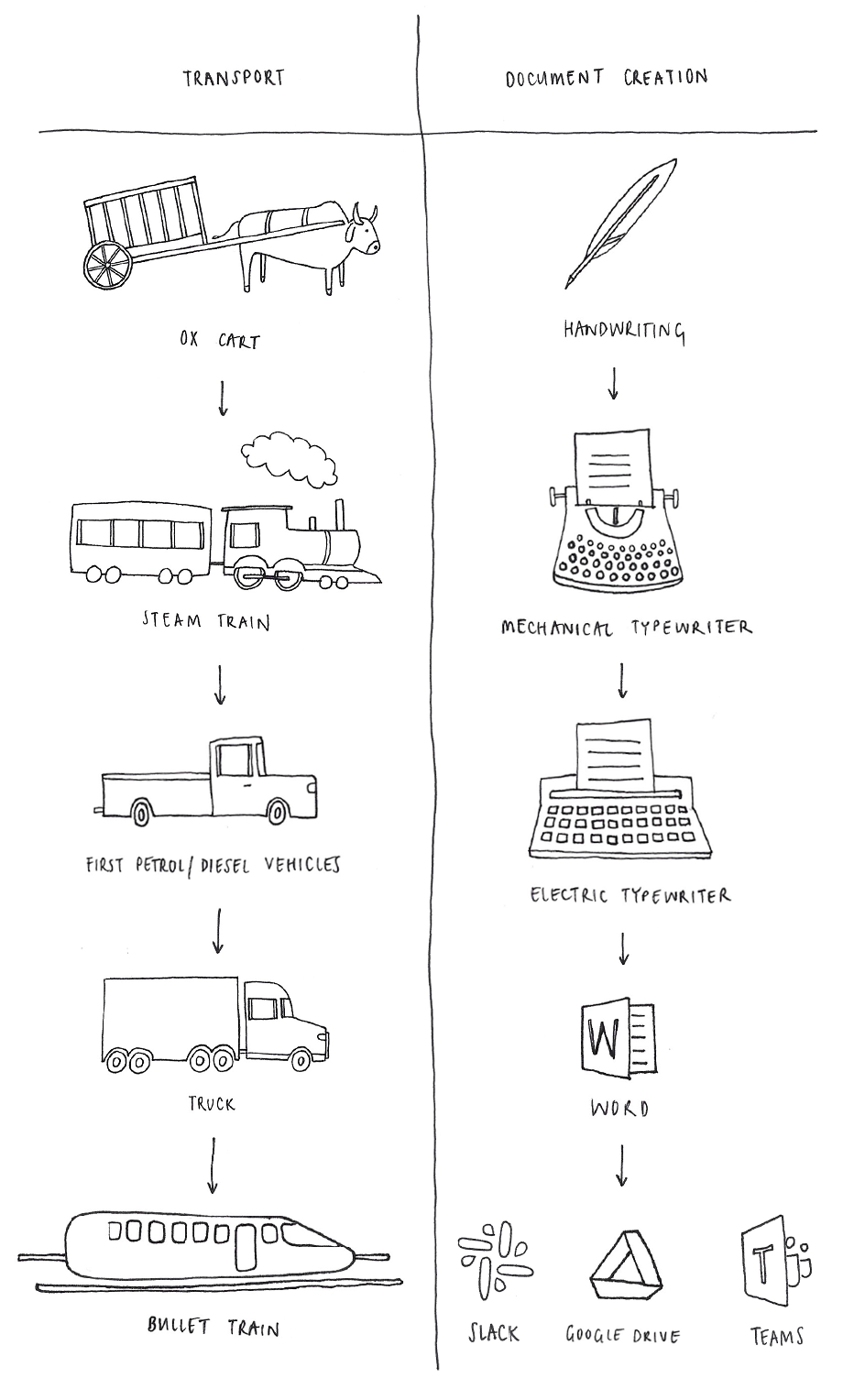 While these examples illustrate efficiency improvements, could there be a better way? Let’s look at the core of the problems we’re trying to solve:

So what are the ideal solutions to these problems? 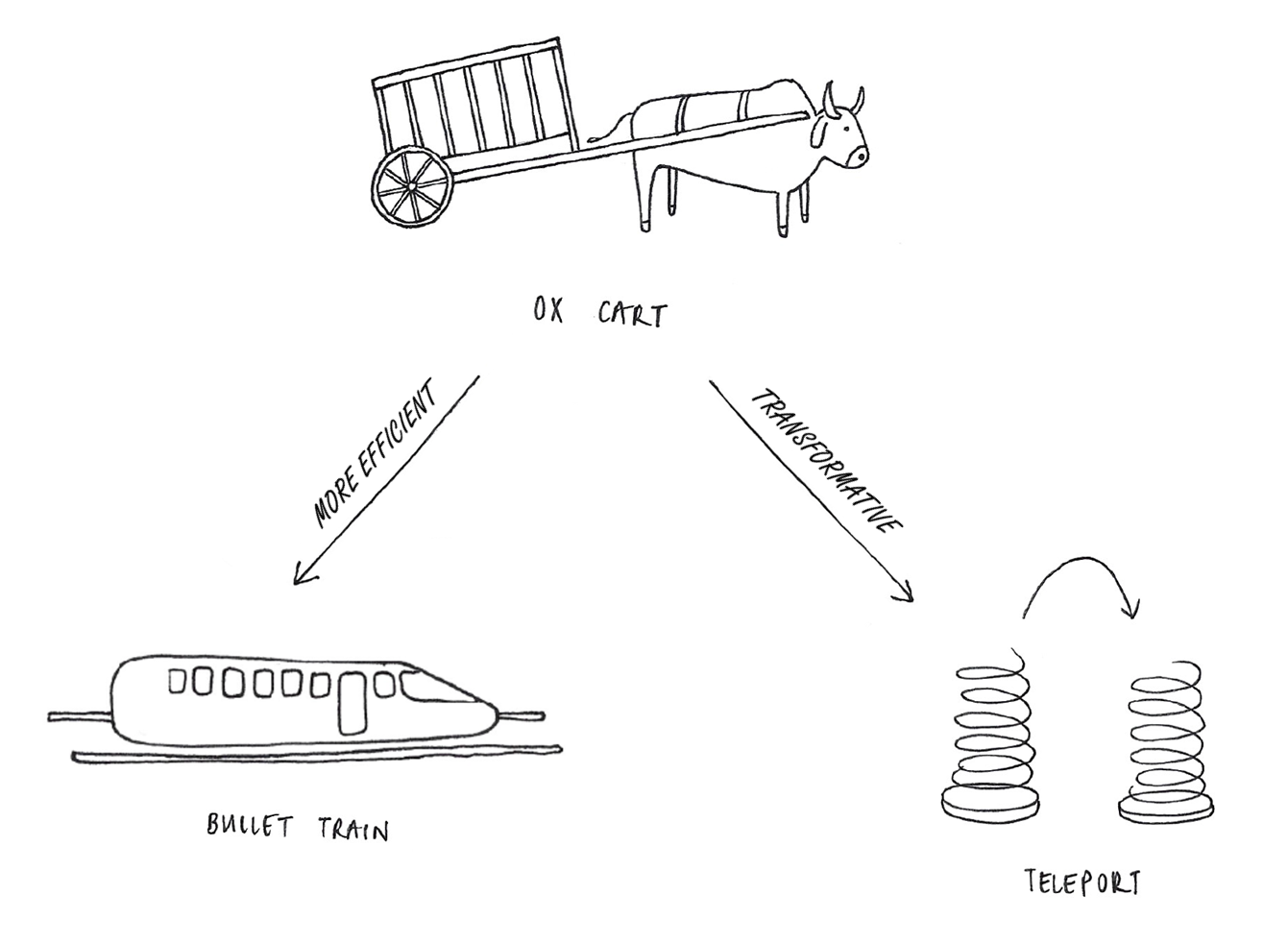 The difference between efficiency improvements and transformation.

Teleportation may require resource intensive R&D and set up for different types of goods. However, once in place, it provides near unlimited capacity and transports goods and people almost immediately.

The setup of document automation may require resources to automate templates and to connect to data sources. However, once in place, it provides near unlimited capacity and generates documents almost immediately. 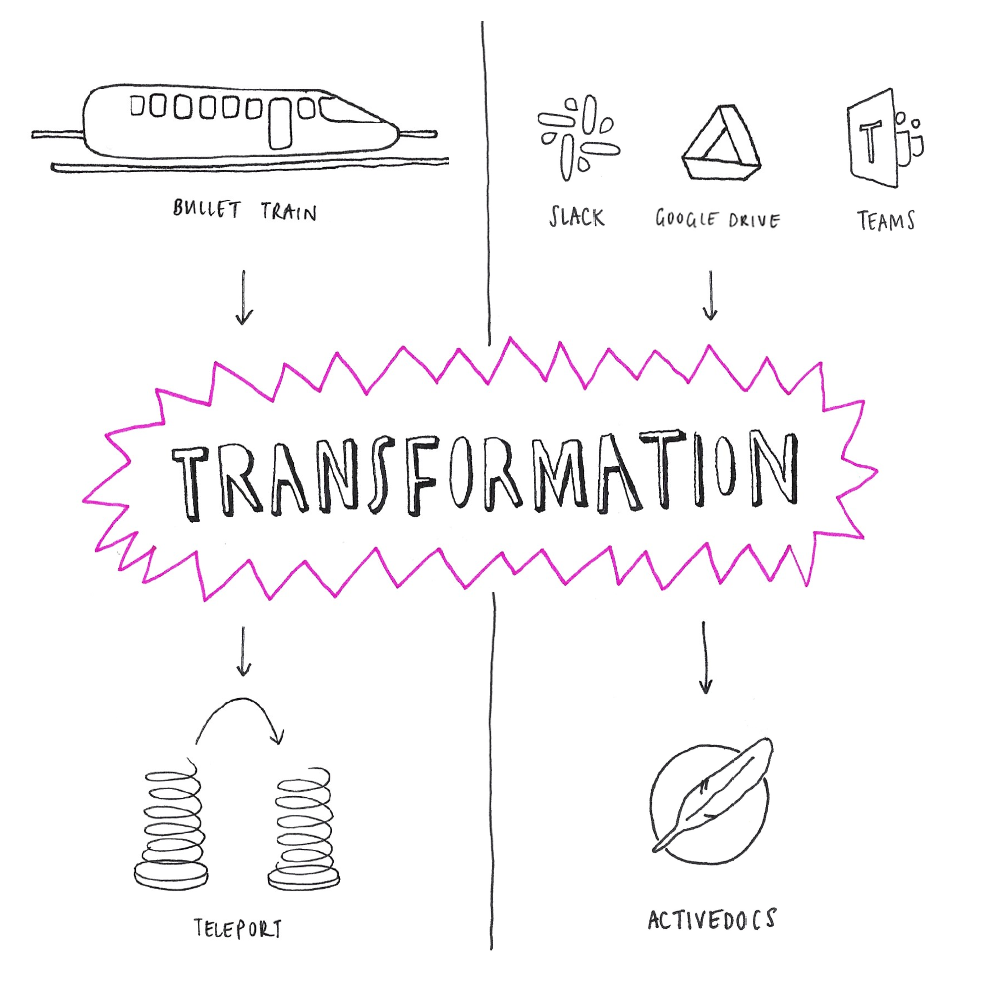 All of the tailored content previously requiring meticulous user attention can be created nearly instantaneously and without user involvement. Of course, you need a sophisticated document engine to run it. Once you have it in place, the possibilities are near limitless.

Rather than providing better tools for the same job, organizations need to use the latest technology to redefine what the job is.

If you need to produce documents, document automation changes the paradigm. You no longer need better tools for the job, because the job of creating documents no longer exists. Instead, the document engine takes your data, your business rules and your templates, and delivers documents that you need, where you need them, with 100% accuracy.

As a document expert, would you rather copy and paste content in the latest content collaboration tool, or would you prefer to have time to focus on designing better documents and processes?

As a business owner or a CEO, would you rather spend resources on building a better ox cart, or implement a teleportation system?